Chritiaan Greyling runs into the rising sun during Stage 1 of the Tankwa Trail. Photo by Oakpics.com.

South African trail running superstar, AJ Calitz and long-time Dryland Event Management event competitor, Yolande de Villiers opened their Tankwa Trail campaigns with stage victories on stage one on Friday the 17th of February. The thirty-two kilometre stage took in the Kaleo singletracks as it wound its way around the rocky koppies which dot the Koue Bokkeveld landscape and provided challenging conditions, especially as the day heated up.

While Calitz and De Villiers were the first solo male and female, respectively, over the finish line, the leading teams were Team Soul Running, featuring J.C. Visser and Mauritz Jansen van Rensburg, in the men’s team category; Salomon/Garmin, formed by Landie and Christiaan Greyling, in the mixed category; and Jana Trojan and Tracy Forbes, running as Partners in Crime, in the women’s team category. 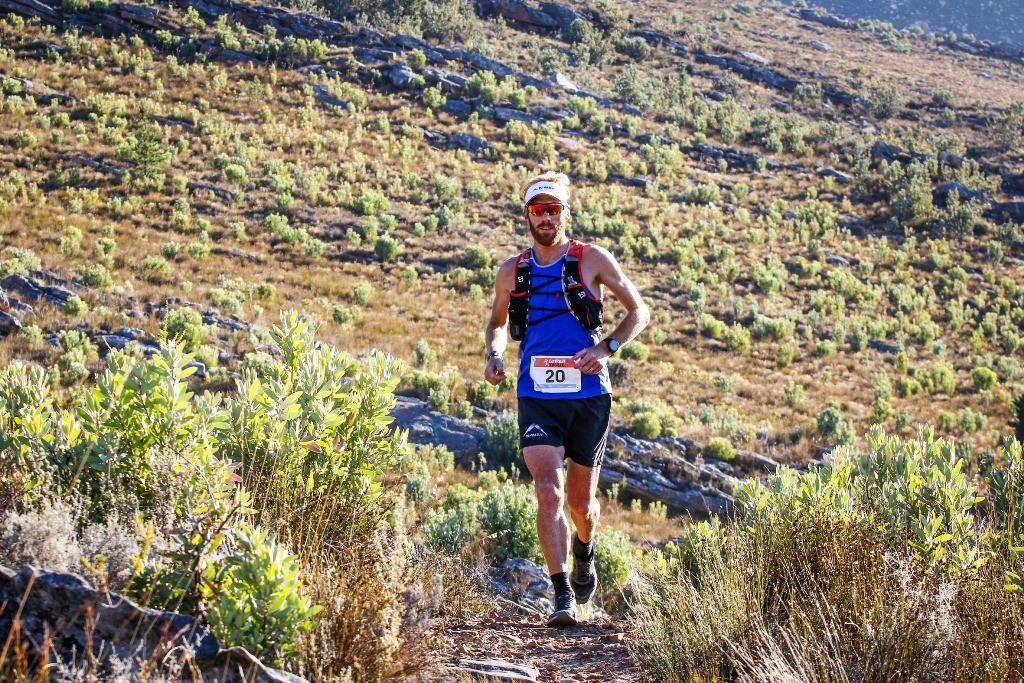 AJ Calitz on his way to victory during Stage 1 of the Tankwa Trail in a time of 2 hours 23 minutes and 54 seconds. Photo by Oakpics.com.

The day got off to a chilly start, but as the sun climbed higher in the cobalt blue sky the mercury rose too. Soon the temperatures were soaring into the mid-thirties, but the heat did not affect Calitz, as he blazed to victory in a time of two hours, twenty three minutes and fifty-five seconds.

A one kilometre neutral zone got the 2017 Tankwa Trail off to a sedate start and once the flag dropped Endi Angelo Pegado set the early pace. Cape Peninsular University of Technology student, Angelo Pegado is a Taekwondo and K-1 fighter by training. In fact the Tankwa Trail is his first ever trail run. So it was not surprising that Calitz caught and then distanced him on the first section of singletrack, eventually extending his lead to win by a comfortable eleven minutes and forty-five seconds over the young Angolan.

The first section of trail was rugged, eroded and featured the day’s most significant climb, making for technical and challenging running. Once beyond the first singletrack jeep tracks and less technical singletacks made up the rest of the stage’s route. The on-going drought in the Koue Bokkeveld clearly affected the trails as Calitz explained: “The route was very similar to stage one last year, but a little more technical because of the sand. You can see the area has been very dry and the dams are all nearly empty.” 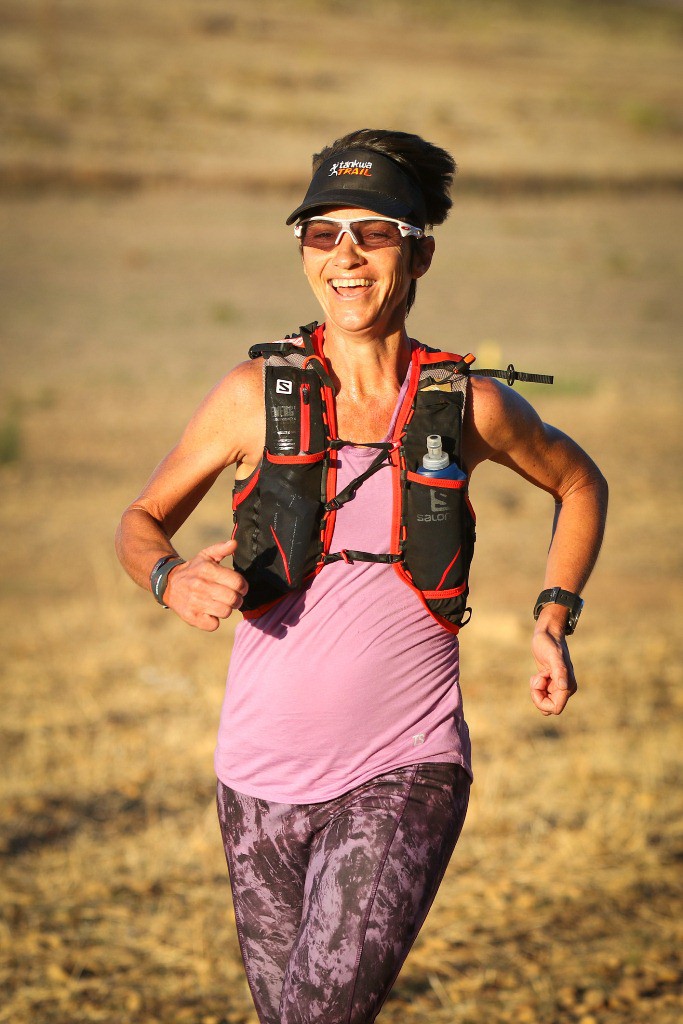 Yolande de Villiers on her way to victory during Stage 1 of the Tankwa Trail in a time of 3 hours 6 minutes and 5 seconds. Photo by Oakpics.com.

De Villiers, along with Riaan Potgieter, is one of only two Tankwa Trail runners to have ridden the Momentum Health Tankwa Trek, presented by Biogen, last weekend. Not only did she ride the Tankwa Trail’s sister event, but she finished second in the elite women’s category, with South Africa cross country champion Mariske Strauss. “Cycling is easier”, a clearly exhausted De Villiers said upon crossing the finish line, “I’ve got big respect for runners. Julle is yster”, she concluded.

Saturday’s stage two sees the trail runners bussed into the Witzenberg Valley for what is sure to be another chilly start. The first seventeen kilometres of the thirty-five kilometre route will explore the pome fruit orchards and rocky singletracks in the shade cast by the high rock faces which line the Witzenberg Valley. The route then crosses into the heat of the Koue Bokkeveld via an old waggon trail and explores a section of virgin singletrack on its way back to the finish line at Kaleo Manor. You can follow the action live on Twitter by following @TankwaTrail and view all the photos and daily highlights videos on the Tankwa Trail Facebook page. 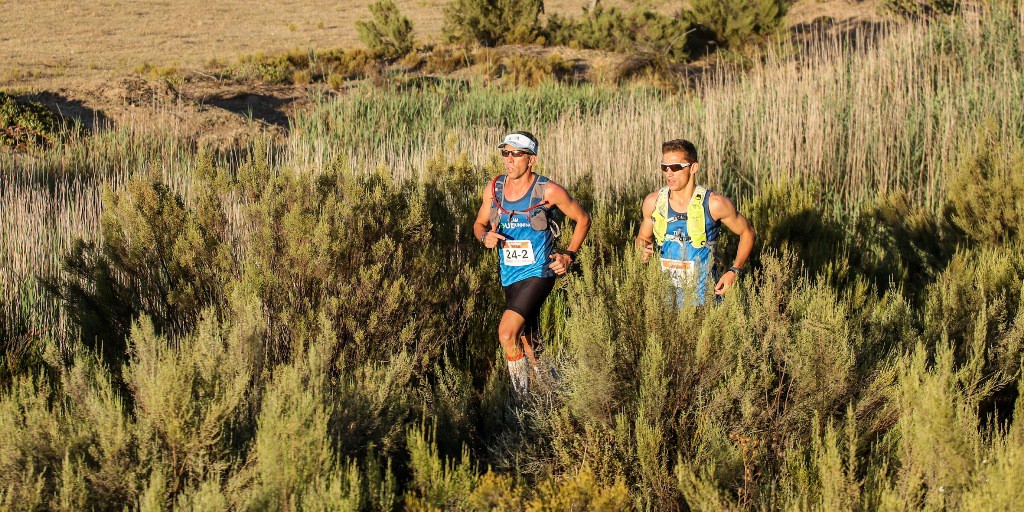 Mauritz Jansen van Rensburg (left) and J.C. Visser (right) of Team Soul Running on their way to victory in the men’s team category during Stage 1 of the Tankwa Trail. Photo by Oakpics.com. 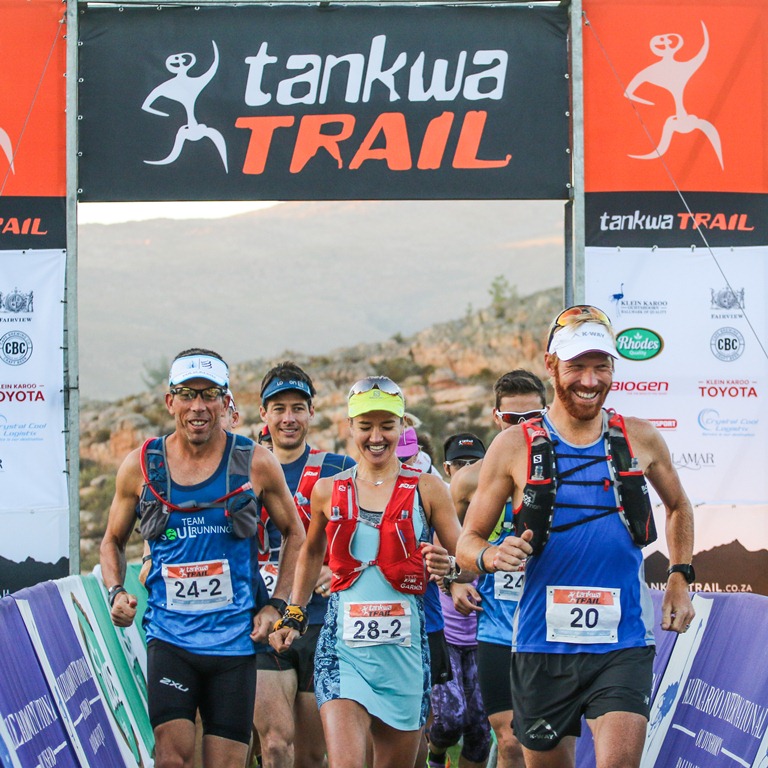 Mauritz Jansen van Rensburg, Landie Greyling and AJ Calitz lead out the field during Stage 1 of the Tankwa Trail on Friday the 17th of February 2017. Photo by Oakpics.com. 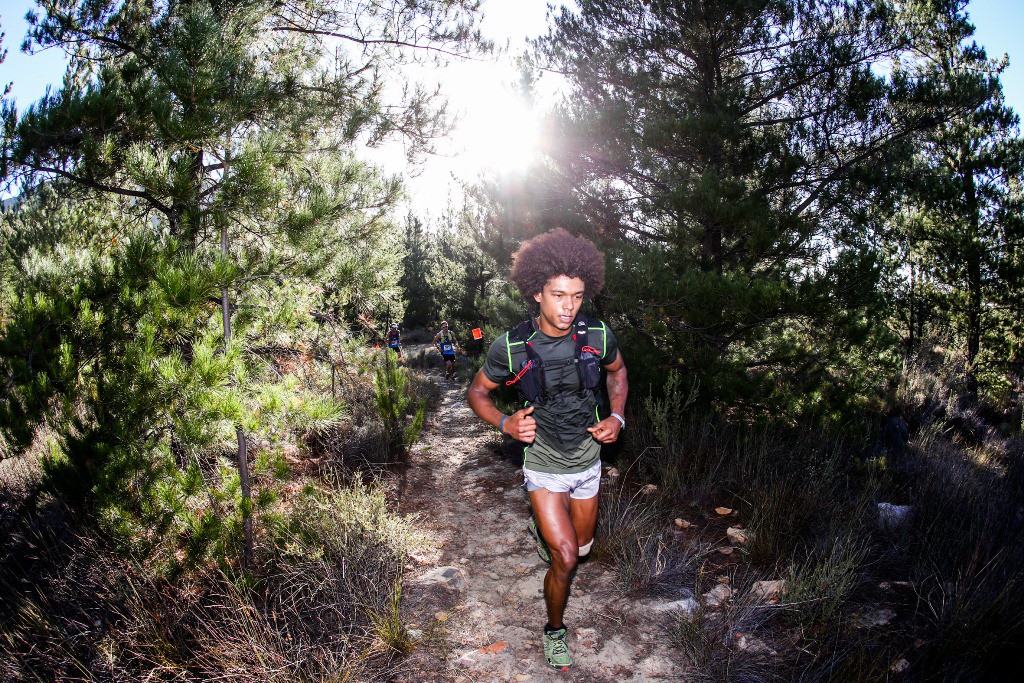 Mixed martial arts fighter Endi Angelo Pegado on his to second on Stage 1 of the Tankwa Trail. Photo by Oakpics.com.

For the full results visit the Jumper Trax website. 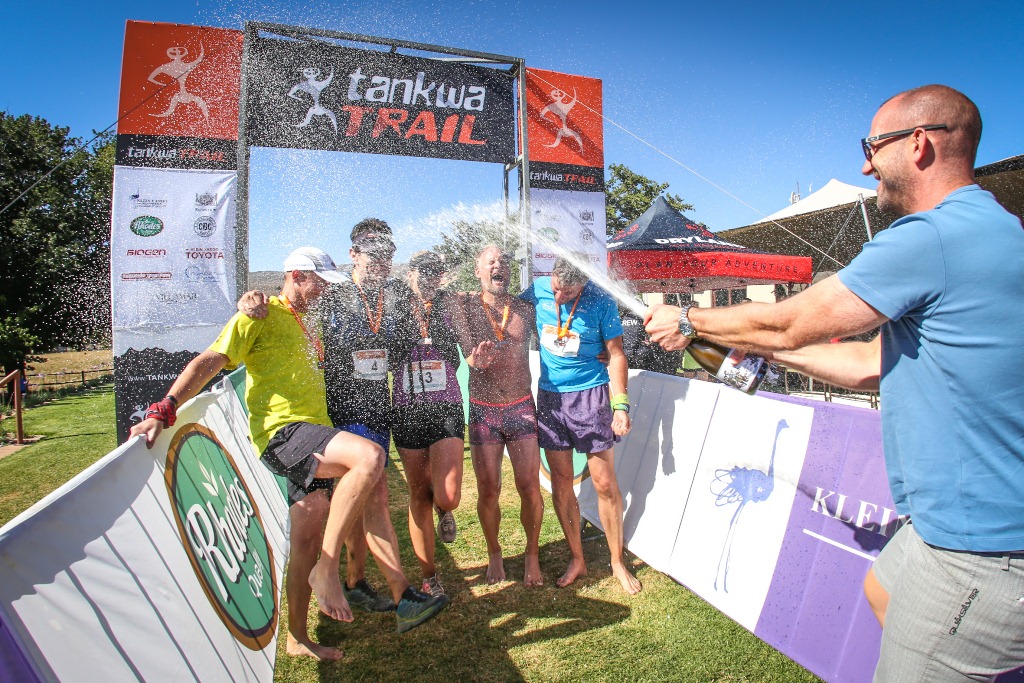